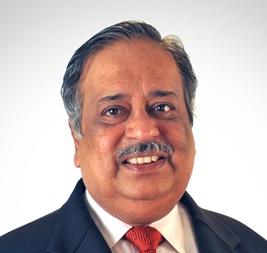 for his exemplary contribution to the Country.

A man ascribed with the enhancement and growth of the country in social and economic belts, Shri M. Damodaran has served the Nation for over five decades with his erudite wisdom, experience and ardent zeal. He is one rare and eminent individual who has held leadership positions in both, the private as well as the public sector, bringing a unique perspective on how the two can work together to foster growth for India.

Recognizing his exemplary understanding of both macro as well as micro policy issues, Shri Damodran is the founder Chairperson of Excellence Enablers Private Limited, a niche Corporate Governance advisory firm and the Founder and Managing Trustee of Non-Executive Directors in Conversation Trust (NEDICT), an exclusive forum for Non-Executive Directors. Being the present Chairman of Indigo, he has established himself as a person whose outlook and demeanor endears his peers and subordinates alike and continues to be a perpetual source of inspiration for them.

His keen social awareness with ability to develop key relationships is widely acknowledged; and his wisdom coupled with skills at articulating, brings him out as an erudite speaker who enthralls his audiences with the simplicity of his words. In his career spanning five decades, he led several organizations, including Industrial Development Bank of India (IDBI), Unit Trust of India (UTI), International Organization of Securities Commissions (IOSCO) shouldering eloquent roles & responsibilities.

During his illustrious career, Shri Damodaran has chaired high powered committees of the Government of India, Federation of Indian Chambers of Commerce and Industry (FICCI), Reserve Bank of India (RBI) and some chambers of commerce. Shri Damodaran is a former Indian Administrative Service (IAS) officer (Manipur-Tripura cadre) and served as Joint Secretary of the Banking Division in Finance Ministry for five years.

An embodiment of humility, graciousness and generosity – he is extremely down to earth, blessed with a charismatic personality and choicest of blessings from the Almighty. Shri Damodaran has demonstrated enormous capability to connect horizon with ground reality as a truly pragmatic leader. He has revealed great zeal to integrate scattered dots for creating exciting mosaic.

It is a moment of exuberance that we have the pleasure of having his honored presence today amidst us on this inimitable occasion.

(Whatever a superior person does, another person does that very thing! Whatever he upholds as authority, an ordinary person follows that)

MANAV RACHNA FRATERNITY HONORS HIS SPECTACULAR CONTRIBUTIONS AND WITH IMMENSE GRATITUDE, BEQUEATHS SHRI M.DAMODARANWITH THIS AWARD, ON SATURDAY, THE 13TH OF APRIL 2019, AT THE MANAV RACHNA EXCELLENCE AWARDS 2019.