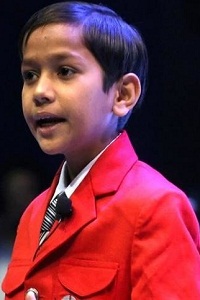 Born on 24th December 2007, Kautilya Pandit (Google Boy) has been featured thousands of times in print media and he has been telecasted live 100s of times on various TV channels due to his immense capabilities and vast knowledge. The mega show KBC which is conducted by Star of the millennium Shri Amitabh Bachhan gave Kautilya a great bounce and helped a lot in getting new platforms and also attaining knowledge as it also helped Kautilya in being the youngest person(at the age of 5 years) to reach KBCs Hotseat.