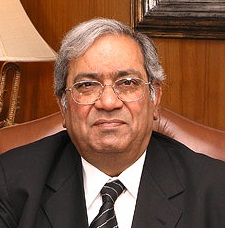 for being the ‘Faridabad Industry Icon’

Mr K. C. Lakhani, the founder and Chairman of Lakhani Armaan Group has been the main author of the success saga of the Lakhani group of industries. A courageously determined person, he has maneuvered the giant ship that his company is, and has pragmatically steered it to horizons previously unseen. He is the man behind the growth and success of Lakhani group and continues to guide this widely spread organization on its way to a promising future. Being the Managing Director of this multi-faceted business company, he infuses his strategic approach and business acumen to expand the horizon of the company’s presence. He is the foundation on which the edifice of his entities lays.

The group came into existence in the year 1966 with Lakhani Rubber Works, an automotive components manufacturing company established by Mr K C Lakhani. It was his vision that soon translated into the success of this company followed by the expansion of the group’s business activities into footwear manufacturing. With the help of his vision, mentorship and the magic of taking everyone together, the group is the largest manufacturer of beach slippers and the second-largest manufacturer of canvas shoes in India. It has been manufacturing shoes for leading brands and has established a strong alliance with the global sports apparel manufacturing giant, Adidas. With Mr. Lakhani in picture, there has been no looking back and the group in the present day holds a prominent position in the footwear as well as automotive industry. The Lakhani group is one of the largest suppliers of rubber components to automobile manufacturers like Maruti, TELCO, Escorts, Sona Steering, DCM Daewoo, etc.

Owing to his noteworthy contribution to the industry, Mr. K.C. Lakhani has been a recipient of several awards. To name a few major ones, he received the Life Time Achievement Award from the Footwear India Journal in 2012 for his unsurpassed success in the field of footwear. In 2014, he was presented the Kohinoor Award by esteemed Dr. APJ Abdul Kalam at the 61st Annual General Body Meeting of Faridabad Industries Association. Always in sync with what India does as a nation, he ensures to do his bit in fulfilling the country’s vision. On the occasion of Gandhi Jayanti, Mr. K.C. Lakhani along with some other entrepreneurs initiated a cleanliness drive in the city of Faridabad, along with taking up the responsibility of eliminating industrial waste from a few locations.

A people’s man, kind, compassionate and sensitive to the needs of others, he has ensured that his values get instilled in the people of his company at all levels. Under his aegis, the Lakhani Group has been taking substantial initiatives in fulfilling social responsibility. Having founded the Lakhani Charitable Trust, the group organizes blood donation camps regularly, organizes wedding ceremonies for the needy, release scholarships for students who are deserving but in need, organize workshops about HIV-AIDS and have also established a committee against sexual harassment.

(One who sees inaction in action and action in inaction, is intelligent among men, and he is in the transcendental position, although engaged in a slew of activities.)

MANAV RACHNA FRATERNITY HONORS HIS SPECTACULAR CONTRIBUTIONS AND WITH IMMENSE GRATITUDE, BEQUEATHS MR. K.C. LAKHANI WITH THIS AWARD, ON SATURDAY, THE 13TH OF APRIL 2019, AT THE MANAV RACHNA EXCELLENCE AWARDS 2019.