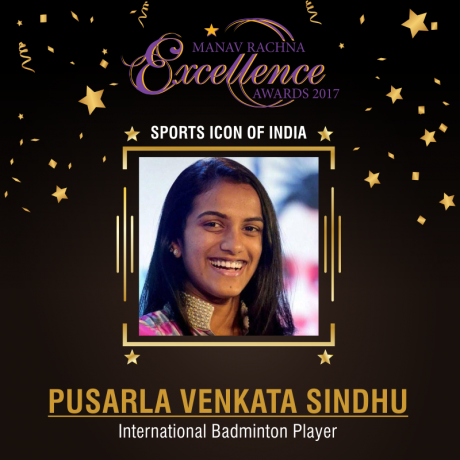 With her extraordinary commitment, service to the nation and liberal approach, Ms. Pusarla Venkata Sindhu, more popularly known as P.V. Sindhu, became the first Indian woman to win an Olympic silver medal. Her professionalism and ceaselss dedication in the pursuit of excellence have made her the youngest recipient of India’s fourth highest civilian honor: the Padma Shri. The most striking feature in her game is her attitude and the never-say-die spirit which has made her win awards and accolades across the globe including the Arjun Award by Government of India in 2013.

She’s an ardent Sportsperson which has made her the first Indian to win two back-to-back medals in the BWF World Badminton Championships after her bronze medal finish in 2014 BWF World Championships held in Denmark.

Ms Sindhu’s seminal experiments in the field of sports have illuminated the path for other aspiring sportspersons in the country. Her discipline, competitiveness and single-minded dedication have brought her international recognition.  It was a glorious moment of pride for every Indian when she broke into the top 20 of the BWF World Ranking in September 2012 at the tender age of 17.

Ms Sindhu has served our country with matchless grace, wisdom, and clarity of vision, best exemplified by the compliments that poured in from all across the world when she was awarded the FICCI Breakthrough Sportsperson of the Year 2014 and NDTV Indian of the Year 2014 awards.

Her silver medal win in the women’s singles event of the 2016 Summer Olympics made her the first Indian shuttler to reach the final of an Olympics badminton event and the youngest Indian to make a podium finish in an individual event at the Olympics. When she cruised to the finals by winning in straight sets at the semi finals, the stage was set for her final showdown with top seed from Spain, Carolina Marín. Marin managed to beat Sindhu in three sets in the 83-minute match and with that, Ms Sindhu clinched the silver medal. She charted history of achieving the feat as she is youngest and first ever woman individual to bag an Olympic Silver medal representing India. This was the second instance of podium finish at the Olympics by any Indian badminton player ever in the history of the sport!