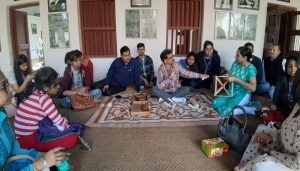 The students were very fortunate to visit the Gandhi Museum, on the occasion of the historical date that commemorates the inception of the Dandi March. Students attended a workshop through which they learned about the life of Mr. Gandhi and the freedom movement he was associated with. The students also cherished the exhibitions in the gallery and tried their hands-on Charkha.

Director of the museum, Shri. A. Annamalai graced the occasion with his germane speech on Mr. Gandhi. He interacted with the students and guided them on the analogous studies of the Gandhian ideologies. Certificates were given to the students. Mr. Ansar Ali, the guide, counseled the students at every exhibit.

The event, to its entirety aimed to impart observatory knowledge about Gandhian literature, Partition Literature, Imperial and Colonial studies to the students so that they could acknowledge the literary significance and could get acquainted with the comparative literature also.

The event became mirthful also as our students released the white  balloons in air to recognize  “Azaadi”.

Lecture to promote Innovation for Healthcare through Biotechnology products