Manav Rachna has always been keen to involve students in extracurricular activities. Keeping this in mind, Department of Students’ Welfare (DSW), Manav Rachna International Institute of Research and Studies (MRIIRS) welcomed Sahaja Yoga and The European Band- VILAMBA to the campus on 11th January 2018 to highlight the aspect of musical meditation that holds the power to transform the inner nature of humans. Dr. I. K. Kilam, Dean, DSW; Dr. Gurjeet Kaur, Associate Professor and Associate Dean, DSW; faculty members, and students of Manav Rachna attended the program.

Sahaja Yoga Meditation is based on Self-Realization through the awakening of our inner power called Kundalini. The program reached the zenith of musical meditation with the great combination of soulful music and knowledge of six chakras present in the body. Mr. Neeraj Srivastava, Senior Manager, Fortis brought the various aspects of Sahaja Yoga to the limelight and enlightened the audience with some steps that for an easy meditation. He quoted Shri Mataji Nirmala Devi, Founder of Sahaja Yoga and said, “You cannot know the meaning of your life until you know the power that created you.” Mentioning the amalgamation of music and yoga, he said, “We need to train our brain well in order to act well.”

The European Band mesmerized everyone with instrumental music and songs like ‘Jai Dev Jai Dev- Jai Mangal Murti’, and few other songs targeted on the thoughts going through our heads. The audience enjoyed and involved themselves in the musical meditation as their first step to self-realization. 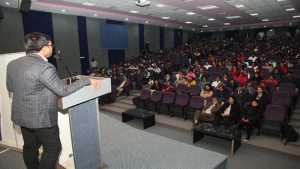 Dr. I.K. Kilam felicitated the European Band with a token of gratitude and appreciated their efforts as well as the connection formed between them and the audience through their music. He said, “We hope to move from a man of success to man of ethics.”

The program enthralled everyone giving them positive vibes to carry forward in their lives. We hope to have such more soulful events in the campus to equip our students with new experiences.

Workshop on Usage of Online Databases for producing Quality Research