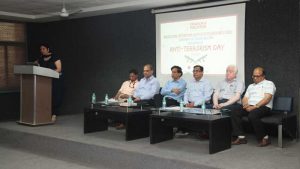 Manav Rachna observed Anti-Terrorism Day today to generate awareness among everyone onboard about the danger of terrorism and its effects on society as a whole. Dr. N.C. Wadhwa, Vice Chancellor, MRIIRS administered the pledge to abide by the country’s tradition of non-violence and tolerance, and promote peace and social harmony all around. Students and faculties took a pledge to fight against the terrorism within themselves and the forces of disruption threatening human lives and values.

A Panel Discussion on ‘Establishing Peace- The Only Antidote to Terrorism’ and ‘Role of Citizens to Counter Terrorism’ was organized to discuss the terrorism at micro and macro levels. The esteemed panelists included Ms. Karishma Mantri, Director, Strategy Blue Stampings and Forging Ltd.; Ms. Shailja Naqvi, Deputy Director, Radio Manav Rachna; Brigadier (Retd.) Satindra Nath Setia, Director Admissions, IT and IEC, MRIIRS; and Mr. Prashant Bhatia, Entrepreneur and a student of Media Studies at MRIIRS. Mr. Nitesh Shankar, AGM, Career Skills and the Chairperson of Manav Rachna Literary Society was the moderator of the panel discussion.

Ms. Karishma Mantri emphasized upon eliminating the fundamental darkness within us in the form of greed, mistrust, jealousy, selfishness, and ego. ‘Initiating the dialogue’ came out as one of the vital steps to fight against the terrorism. Brig. (Retd.) Satindra Nath Setia gave three ways to counter terrorism which included Political Will to root out the terrorism irrespective of political games, Professional Policy independent of government interference, and high quality intelligence.

Radio Manav Rachna also took the initiative to spread awareness among the masses through short informative modules including promo of slogan- ‘SAY NO TO TERRORISM’ and broadcast of Anti-Terrorism pledge in Hindi and English throughout the day.

With such initiatives, Manav Rachna hopes to eradicate intellectual terrorism that leads to coloured thoughts and destructive actions.

Orientation Program for the PhD Scholars