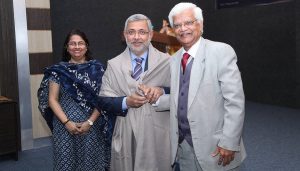 An expert talk by Justice Kurian Joseph was organized by the Faculty of Law, Manav Rachna University on Alternative dispute resolution (ADR) to enlighten the students on the same.

Justice Kurian began his legal career in 1979. He was a member of the Academic Council, Kerala University from 1977 to 1978. After having an illustrious career, he was appointed as the judge of the Kerala High Court. In February 2010, he was elevated as Chief Justice of the Himachal Pradesh High Court and on March 2013, he became the judge of the Supreme Court of India.

Mr. Tariq Khan, a renowned advocate and author of the book ‘On the Rise’ also graced the occasion with his presence.

Justice Kurian had an interactive session with the students and enlightened them on various encounters a lawyer faces and asked students to be prepared for the actual time as the legal representative of future generations.
Prof. Jose P. Verghese, Prof. Emeritus, Faculty of Law, Manav Rachna University (MRU) felicitated our esteemed guest with a momento.

Dr. Versha Vahini, HOD, Dept. of Law, delivered the Vote of Thanks and reiterated our commitment to bring more such relevant topics and acclaimed speakers/experts in future Lectures.

MRU Orientation Programme – Day 3 of B.Tech CSE and IT

Back to Basics Series: Part 2