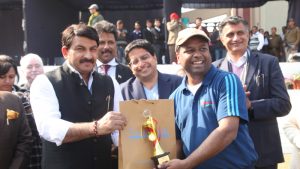 Dr. Prashant Bhalla shared that Manav Rachna Educational Institutions are committed to creating better human beings. He said: “All that we do at the campus; be it our focus on entrepreneurship, our innovation eco-system and the sports infrastructure that we provide to our students … are all aimed at creating better human beings”.
The Chief Guest Mr. Manoj Tiwari reminisced his days as a cricket player when he batted for an over during this tournament. Recounting the days of Celebrity Cricket League, he thanked Mr. Sarkar Talwar for his contribution in helping take the Celebrity Cricket League to its existing levels.

The first match was played between TCS and Accenture.TCS won the toss and decided to bat and scored 192 runs at the loss of four wickets, giving tough competition to Accenture. But Accenture made the hour count and won the match by securing 193 runs. Mr. Sourabh from Accenture was considered ‘Man of the Match’.

The view of the grand Champion Trophy excited every player and filled them with more passion to be the holder of this trophy.

Symposium on ‘Issues, Research and Solutions’ on Water at Manav Rachna