An Inter-University Students’ Seminar on the topic Portrayal of Women in Literature and Media was organized by Department of English, Faculty of Media Studies and Humanities on October 10, 2018. The Seminar aimed at providing a platform to the under-graduate and post-graduate students to present their research papers on a very pertinent topic. 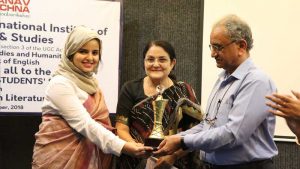 More than 35 students presented their papers on various aspects of the topic. Students from University of Delhi, Jamia Millia Islamia, Lingaya’s University, Indira Gandhi National Open University and from various faculties of MRIIRS and MRU participated in the seminar.

The topic of the seminar was highly appreciated by the Vice Chancellor as he pointed out that today women are the crusaders against injustice as they are making their voices heard through “Me too movement” on social media. Dr. Neemo Dhar, Dean FMeH also applauded the efforts of the Department of English for organizing a seminar that is very relevant in the current social scenario to understand the struggle that women go through in their lives.

Three prizes and certificates were awarded to the best three paper presenters.

The first prize was awarded to Ms. Sidra Islam from Gargi College, University of Delhi. The topic of her paper was “The Voyeuristic Gaze of the Masses and Rana Ayoub’s Case: Portrayal of Female Journalist in Media”.

The Second Prize was awarded to Ms. Jigyasa Chaudhary of Lingaya’s Vidyapeeth. The topic of her paper was “Objectification of Women in Cinema and Advertising World.”

The third prize was awarded to Jatin Taneja of FBSS, MRIIRS for his paper titled “Portrayal of Women in Literature and Media”.

All participants were given certificates of participation. The seminar was a great success, as various aspects of the Portrayal of Women in Literature and Media were deliberated by students in a very critical and analytical manner.

Students of Nutrition and Dietetics Win Accolades at International Conference