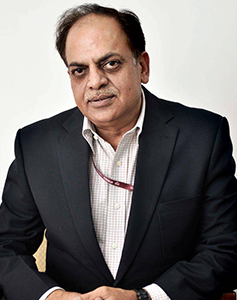 An eminent and accomplished officer, an outstanding administrator and a high-achieving person, Shri Yudhvir Singh Malik, secretary in the Ministry of Road Transport and Highways, is one of the most distinguished IAS Officers of the 1983 batch of Haryana cadre. Shri Malik is known for his commendable commitment and service to the Nation, and is touted as a farsighted visionary with resplendent forthrightness and sanguinity. With his profound knowledge and understanding, he has successfully undertaken a slew of special assignments and has held a variety of important portfolios. He has shouldered numerous prestigious positions at the centre and in state over the past three decades. Shri Malik truly comes across as a multifaceted personality of many accomplishments, immense perseverance and sustained hard work.

He has held the significant position of CEO, Food Safety and Standards Authority of India (FSSAI) under the Ministry of Health & Family Welfare. Shri Malik is known for his extraordinary commitment and service to the nation with a liberal approach, sociable disposition and immense patience, coupled with an abiding sense of impartiality. He has served as Joint Secretary in the Ministry of Corporate Affairs during 2004 to 2008 where he led several path-breaking IT initiatives of the Government of India. An articulate and eloquent speaker, he is known for his meritorious services of exceptional order which have earned him several awards and recognitions. He is currently responsible for India’s 18 Billion Dollar Highways Development Programme and the preparation and monitoring of the country’s road safety initiatives like Golden Quadrilateral, Sethu Bharatham and Char Dham projects.

He has been a brilliant scholar throughout which is exemplified by his academic credentials. Shri Malik holds degrees of Masters in English Literature, M.Sc. in Development Management with distinction, and a Degree in Journalism and Mass Communication. His endeavors rightly lead him to become the recipient of Prime Minister’s Award for National level excellence in Public Administration for his outstanding contribution in the team initiative- an e-governance project for the year 2008.

Shri Yudhvir Singh Malik is highly acclaimed for his unstinted commitment and determination, unassuming nature and deep compassion. His sagacious and caring advice has been a source of inspiration. An extremely down to earth and fascinating personality, he is greatly respected and admired by all.