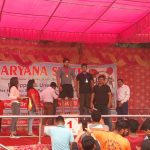 He was awarded a certificate and medal. Manav Rachna wishes him for all his future endeavors.

The students of M.Sc. Mathematics, under the mentorship of Dr. Ruchi Gupta attended an International Conference on Modeling Optimization and Computing for Engineering Problems from 12-14 October 2018 at IIT , Roorkee.

A team of students of B.Sc. (Hons.)  won 3rd prize in SLOGAN WRITING competition at TRANSCENDENCE on 28th February, 2017.