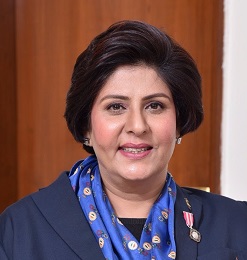 for her exemplary contribution as the ‘Sports Icon of India’.

If one was to talk about battling all odds and emerging a winner, Ms. Deepa Malik stands as a living testament. It is with her extraordinary commitment, service to the nation, and liberal approach, that she became the first Indian woman to win a medal in Paralympic Games and won a Silver medal at the 2016 Summer Paralympics in the shot put. Her panoramic vision, professionalism and direction in pursuit of excellence have made her the recipient of India’s fourth highest civilian honor: the Padma Shri.

The most striking feature in her persona is her attitude and the never-say-die spirit which has made her win awards and accolades across the globe including the President role Model Award in 2014 and Arjun Award by Government of India in 2012. She’s an ardent and avid Sportsperson and with that attitude, she recently scripted history by winning the silver medal in the women’s shotput F53 event at the Rio Paralympics, with a personal best throw of 4.61m! This win at the Rio made her India’s first woman and oldest athlete to ever win a medal at the Paralympics.

Deepa’s seminal experiments in the field of sports have illuminated the path for other aspiring sportspersons. Her discipline, competitiveness and focus have bestowed her with international attention. At an age when most athletes are considering retirement, Ms. Malik was just getting started. She began by joining the Himalayan Motorsports Association and conquered an 8-day 1,700 km bike ride to 18,000 feet in sub-zero temperatures.A huge fan of biking, Deepa has entered the Limca Book of Records 4 times.

Deepa Malik has served our country with matchless grace, wisdom, and clarity and has been bestowed with compliments from all across the world. Wife of a veteran cavalier Colonel Bikram Singh and daughter of a veteran Infantry Colonel BK Nagpal, she is the mother of two adult daughters – Devika and Ambika. Raised in an army family, Ms. Deepa Malik is used to braving difficulties. An embodiment of humility, graciousness and generosity – she is extremely down to earth, blessed with a charismatic personality and choice of blessings from the Almighty. Ms. Deepa Malik has demonstrated enormous capability to connect horizon.

It is a moment of exuberance that we have the pleasure of having her honored presence today amidst us on this inimitable occasion.

(Besides these, is the Supreme Divine Personality, who is the indestructible Supreme Soul. He enters the three worlds as the unchanging controller and supports all living beings.)

MANAV RACHNA FRATERNITY HONORS HIS SPECTACULAR CONTRIBUTIONS AND WITH IMMENSE GRATITUDE, BEQUEATHS MS. DEEPA MALIK WITH THIS AWARD, ON SATURDAY, THE 13TH OF APRIL 2019, AT THE MANAV RACHNA EXCELLENCE AWARDS 2019.