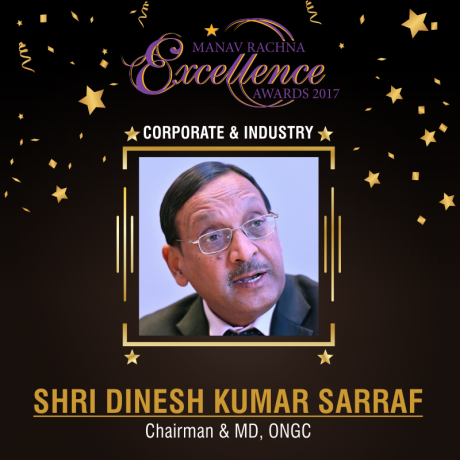 He is admired the world over for his contributions to the Oil & Gas Industry and has extensive experience of serving in professional bodies at the Board level for myriad organizations and community. ONGC, India’s most valuable Maharatna public sector enterprise and one of the premier E&P companies in the world has grown by leaps and bounds under Shri Sarraf’s able leadership. He has been the trailblazer in raising the stagnant oil and gas output and assiduously exploring more reserves. With his profound knowledge and understanding, he has successfully undertaken numerous assignments and has held a number of important portfolios.

At a time when global oil and gas prices have plummeted, ONGC under his leadership is strongly emphasizing on adoption of the best operational and cost practices and appropriate oil and gas technologies, for realization of greater operational efficiencies. Under his leadership, ONGC has made the biggest ever financial decision in its history, unveiling an investment of over $5 Billion in the east coast oil and gas asset to enhance oil and gas production significantly on fast-track. OVL, which since inception had invested USD 17 billion in 32 assets in 15 countries till 2011, has struck over USD 11 billion worth deals in the past one year under his venerated policy decisions.

A post graduate in Commerce from the University of Delhi, Shri Sarraf is also a member and patron of the Institute of Cost and Works Accountants of India and the Institute of Company Secretaries of India respectively. His eye for meticulous detail and focus as a researcher are unparalleled, bringing a whole bounty of success for his organisation.