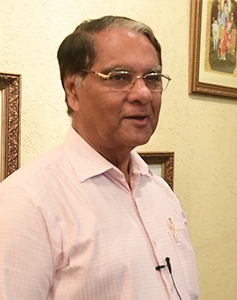 A luminary of great eminence, an illustrious leader, a highly experienced strategist and above all a great humanist, Shri Shahi has showcased a glittering career of exceptional devotion and sustained hard work. A front runner, trailblazer and an erudite personality in the field of Engineering, Shri RV Shahi, is the revered Chairman of Infratech Engineering Pvt Ltd. A dazzling feather in Shri Shahi’s cap was his stint as the Chairman and Managing Director of Bombay Suburban Electric Supply (BSES Ltd) which, under his leadership and diligently focused guidance, transformed from a small power utility to one of the enormous in the nation. Later, he went on to serve as the Secretary to the Government of India in the Ministry of Power.

Since childhood he had demonstrated latent leadership qualities which can very well be exemplified with him being an alumnus of National Institute of Technology, Jamshedpur where he studied Mechanical engineering. He then earned post-graduate degrees in Industrial Engineering and Business Management; and a Diploma in Advanced Industrial Management from the prestigious Delft, Holland. An extremely humble person, he is blessed with a charismatic personality and a great vision for the future.

Being a pioneer strength to the field of Engineering, Shri R.V. Shahi was bestowed with the prominent “Best Power Man of the Millennium Year 2000” award by National Foundation of Indian Engineers.

He is a prolific writer and the most venerable and acclaimed publications by Shri Shahi have been a great contribution to the country, two of them being “Towards Powering India: Policy Initiatives and Implementation Strategy” & “Indian Power Sector: Challenge and Response”. He is truly a quintessential personality.