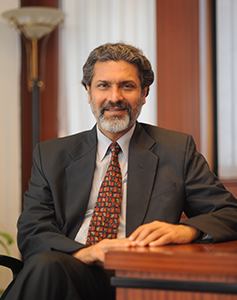 Shri Rajeev Dubey, is a celebrated name in the realms of developing the best in human capital of an organization. His wisdom and compassion have been the bedrock for various Human Resources and Industrial Relations initiatives at the prestigious Mahindra and Mahindra group. He exemplifies the thought that leadership is about empowering people to be the best they can be and earnestly worked towards igniting the passion among people to blend organizational and personal goals, thus building a sense of fraternity and satisfaction among the employees of the organization. Mr Dubey has been an enabler in his appreciative attempt to harness the power of people.

Besides being the member of the Group Management Board of Mahindra & Mahindra Ltd.,Mr. Dubey is on the Boards of several sister concerns of Mahindra & Mahindra Group of companies and looks into a plethora of key responsibilities ranging from Group Communications, Government Relations, Corporate Social Responsibility to Infrastructure and of course, Human Capital initiatives and After – Market. Mr. Dubey joined Mahindra in 2004 after spending 29 illustrious years with the Tata Group and has formed an integral part of the Mahindra Group ever since. He has been appointed National President of the Employers’ Federation of India (EFI), one of the bodies representing India at the International Labour Organisation (ILO) in Geneva.

Sh. Rajeev Dubey’s emphasis on academic brilliance has been nothing short of phenomenal. After completing his Master’s in Economics from the Delhi School of Economics, where he received a National Scholarship, he did his MBA from the prestigious Ivy League, Yale School of Management, USA, which he attended as a JN Tata Scholar and was selected as a Distinguished Alumnus of the school. A graduate from St. Stephen’s College, University of Delhi, where he ranked first, his accomplishments are truly magnificent and encompass a very wide range of activities.

Mr. Dubey holds the GPHR (Global Professional in Human Resources) certification from the Society of HR Management, USA and is associated with several prestigious Institutes and Committees. Determination, deep commitment and a vision for the future are the hallmarks of his amazing personality and he possesses a distinct ability of reaching out to people and moving them with his compassion and humility. Respected by all, Mr. Rajeev Dubey carries an immensely popular and charismatic personality.