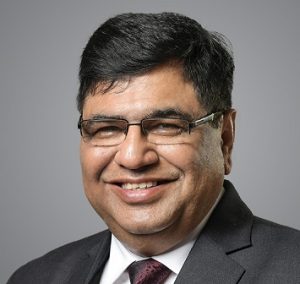 for his exemplary contribution to the Nation.

A luminary of great eminence, an illustrious leader, a highly experienced strategist and above all a great humanist, Shri Sobti has a rich experience of 4 decades in power and manufacturing industry with an academic background in International Management and Project Management. Before taking over the helms at BHEL, he was the custodian of important portfolios of Power; Finance; and Engineering and Research & Development at the company. He has been a part-time chairman of the board of Raichur Power Corporation Limited, a joint venture company of BHEL and Karnataka Power Corporation Ltd.  Apart from his regular responsibilities, Shri Sobti has been the Chairman of the CII’s National Committee of Capital Goods and Engineering in 2017-18 & 2018-19, and the of CII Public Sectors Committee in 2017-18. He is also a member of the Studies Committee of the World Energy Council and is part of prestigious CEO level bilateral forums such as Indo-US, Indo-French, Indo-Sweden, etc.

He is widely acclaimed for turning the fortunes of BHEL. Under his stewardship, BHEL’s power business exceeded the targets set by Ministry of Power by 9%, achieving a capacity addition of over 45 GW during 12th five year plan. He is spearheading the fast-track development of world’s first Advanced Ultra Super Critical technology (AUSC), a highly–efficient environment friendly technology to be used by mega thermal power plants of the future. Under his charismatic leadership, BHEL is also not only foraying into new areas of nation building but also developing technology of future, like: indigenous propulsion technology for railways, e-mobility and battery solutions, producing methanol from coal, regenerative braking in locomotive leading to energy saving, and development of powerful locomotives, to name a few.

Recognizing his contribution to the power sector development, Shri Sobti has been honoured with several awards like the ‘CBIP Special Recognition 2018 for Excellent Contribution in Power Sector Development’ by the Central Board of Irrigation and Power; Visionary Leader in Heavy Engineering and with the fellowship of Indian National Academy of Engineering; the Eminent Engineering Personalities award by the Institution of Engineers (India); and India Pride Award for Excellence among Central PSUs. Determination, deep commitment and a vision for the future are the hallmarks of his amazing personality. It is a moment of exuberance that we have the delight of having his honored presence and contentment of his company today amidst us on this inimitable occasion.

As the lord expounds:

(By observing the actions of the great, others find their rules of action. The path of great becomes guide to the world.)

MANAV RACHNA FRATERNITY HONORS HIS SPECTACULAR CONTRIBUTIONS AND WITHIMMENSE GRATITUDE, BEQUEATHS SHRI ATUL SOBTI WITH THIS AWARD, ON SUNDAY, THE 5THOF MAY 2019, AT THE MANAV RACHNA EXCELLENCE AWARDS 2019.