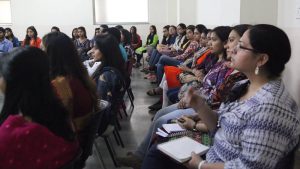 The second workshop threw light on the online movement that went viral on social media. The movement demonstrated the widespread sexual assault and harassment especially at the workplaces. The workshop was conducted by Prof. Chavi Bhargava Sharma, Executive Director and Dean, FBSS, MRIIRS who involved the participants by sharing her personal experiences and also encouraged the participants to share their experiences so that a solution or a motivating angle can be discovered.

Prof. Chavi Bhargava Sharma motivated the participants to take a step against assault or violation at the workplace. She also mentioned that such kind of happenings and emotions generated due to them, if repressed, remains fresh in our unconscious and are depicted in different verbal and non-verbal ways and effect our mental well-being.

The workshop also involved a short questionnaire on social norms & taboos, as how they play an integral role in our daily life such as the ways objects are personified as masculine & feminine.

She ended her workshop by saying “Start a spark, it will gradually lead to fire.”

SVEEP Program in association with Election Commission of India

Inauguration of FDP on Cloud Computing

Student selected as an official delegate representing India in UFM