Manav Rachna hosted Team Raag Desh, honouring them for highlighting the sacrifices of unsung heroes of India, who laid their lives for the Freedom for India from the British under Subhash Chandra Bose, who coined Tum Mujhay Khoon Do Main Tumhay Azaadi Doonga”.

Thanking the Manav Rachna Family, actor Kunal Kapoor, who was here at the Manav Rachna Campus for the promotion – Raag Desh, in which he is playing a powerful character of  Major Shah Nawaz  Khan  said, “He always wanted to work with Tigmanshu Dhulia and he did not lose the opportunity to work with him.” The ace actor also said that he got fascinated about Neta ji Subhash Chandra  Bose’s life and mission while he was reading about him and Shah Nawaz Khan and Indian National Army. He further elaborated upon that the INA was funded by common people and was quite popular amongst them.

Meanwhile, budding actor Mohit Marwah said that he’s very excited about the film- Raag Desh. He also spoke about the challenges the entire crew faced while making of the movie. And the rest is history as they say. “We have really worked hard and put in sweat and blood for the success of the film.”

The Producer of the film Gurdeep Singh Sappal extensively spoke about patriotism, Constitution of India and Preamble. He also said that India was the first country in the world to grant Equal Rights to every citizen of the country. 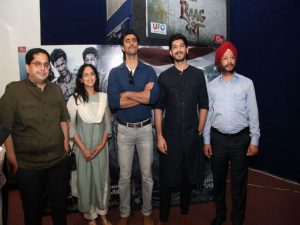 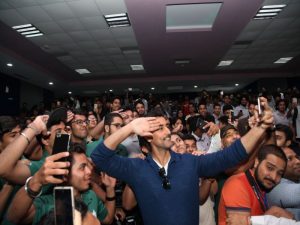 The film also stars Amit Sadh in the lead role besides Kunal Kapoor and Mohit Marwah. It is written and directed by Tigmanshu Dhulia, Produced by Gurdeep Singh Sappal, CEO, Rajya Sabha TV and Amrita Rai, Excutive Producer. The Film is set to be realsed on July 28,2017.

The meet was also followed by an interactive session between the star cast and students of the Manav Rachna .

The film cast also met the Mascot of Manav Rachna’s annual festival Resurrection –Ronze. They also clicked a selfie with the students.