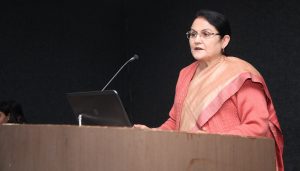 Welcoming the dignitaries and the students, Prof. Neemo Dhar quoted “It resulted in communal riots, horrific bloodshed and unimaginable brutality. The partition displaced over 14 million people along religious lines, creating overwhelming refugee crises in the newly constituted nations. It was the largest human exodus in history”.

Dr Guneeta Bhalla, Founder and Executive Director of “The 1947 Partition Archive” shared her experience of interviewing more than 100 survivors of partition through crowdsourcing and crowdfunding. She invited the students to volunteer and be part of this important project. Sharing her inspiration to start this project she said that “after a visit in 2008 to the oral testimony archives at the Hiroshima Peace Memorial, she was inspired and began interviewing Partition survivors in 2010.” During the partition of India, 1% of the world population became refugees, yet the event has not been properly documented. Through this project, 7500 stories of the survivors of partition have been documented so far and more documentation is going on. 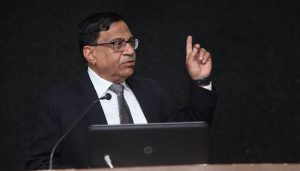 The paper on “Literature of India’s Partition of 1947:A Review” by Prof.  Bhim Singh Dahiya, former Vice-Chancellor, Kurukshetra University, was read out by Prof Vikram Kharab. In his paper, he claimed that the partition literature is successful in projecting the turmoil of partition. He analyzed some of the well-known novels of partition literature like Salman Rushdie’s ‘The Midnight’s Children’, Bhisham Sahani’s ‘Tamas’, and Manohar Malgonkar’s ‘Bend in the Ganges’.

The event also comprised of display of exhibits depicting the partition and its aftermath through the eyes of various survivors. The exhibits were displayed, in association with the “1947 Partition Archive”, enabled the students to witness the personal stories of the partition era.  The exhibits were based on original, previously unpublished research and provided fascinating glimpses into the history and heritage of India.

Overall it was an enriching experience.

FDP on Python Programming by FCA