On 7th March 2017, Manav Rachna International University, Faculty of Management Studies, organized a ‘Women safety and street survival program’ by Ms. Mriganka Dadwal the founder of the SLAP,” STREET LEVEL AWARNESS PROGRAM” an NGO founded in 2012, which was born after the nirbhaya incident. The NGO battle against abuse, assault and rape. They work towards a safe, harmonious and gender equal society. She has many other credentials to her name like organizing the “Combating gender based violence with lyun Rosenthal”, advisor to president Obama Washington DC and many more. 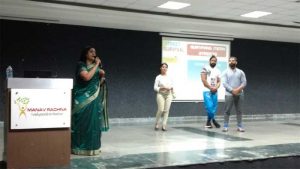 The main objective of the Workshop was to make students aware of various self-defence measures that can be taken against eve-teasing and domestic violence Ms. Mriganka Dadwal along with Mr.Danny and Mr. Rocky showcased the various self- defence techniques along with the importance of presence of mind in order to be safe and alert. 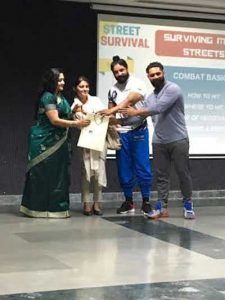 Ms. Mriganka Dadwal firstly clarified that the person responsible for their safety are they themselves not police and others. A person should use his or her will power and presence of mind to fight odds. A person should fight, flight but not freeze in these situations. Heading forward she told about various auditing spaces for safety like unknown territory, unknown shortcuts, empty transport, bad crowded place etc., She taught how to use emergency number, help line number, cab safety and briefed about various safety app like “Himaat” app and their limitations. After that with the help of Mr. Danny and Mr. Rocky she demonstrated various combat skills, taught about various soft parts a woman can take advantage of to hit in her self-defence. 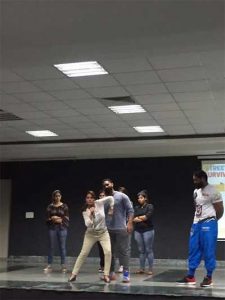 She talks about many sorts of assaults and informed girls that it is not mandatory to always carry a weapon as she made girls realized that things girls carry in their bag can also work as a weapon to protect them. She also talks about the power of saying ‘No” by stating the example of the movie ‘Pink’.  She also briefed about the use of pepper spray and various daily use items  that can be used as a weapon to protect the girls.

She also talks about cabs which are there for the woman . She tried to demonstrate each and every possible situation which a girl actually faces in public areas.

At the end, Dean of FMS, Dr. Chavi Bhargav Sharma thanked the guests and said that she feels proud that she is celebrating women’s day for the last 7 years in the University. This was the first step of the ‘Swayamsiddha’ initiative by FMS, MRIU to promote empowerment of women.