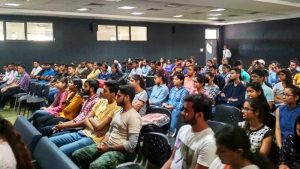 Manav Rachna University observed the second anniversary of Surgical Strike, the Indian Army’s strike against terrorism on September 27th 2018, commemorating the valour and sacrifice of the armed forces. The event commenced with the welcome of the Guest of Honour- Colonel VK Gaur, who has retired from the armed forces as Director, Operation Research and System Analysis, Army Headquaters. He has also been honored with prestigious awards like Vishist Seva Medal, Chief of Army Staff Commendation Card, Army Commanders Commendation Card.

Col. VK Gaur sensitized the students on the meaning of Surgical Strike. He began his speech with the words “God came in Uniform to save us”. Sharing his experiences in a very interactive manner and jovial mood, he touched the serious issues that our country is facing. He quoted Chanakya’s words- “Our Neighbor is our Natural Enemy.” He emphasized that youth should have obsession in their words and deeds.

Dr. Sangeeta Banga, Dean Student Welfare, presented memento to our guest as a token of love and respect. The event culminated with the National Anthem. It was a remarkable experience for all involved.