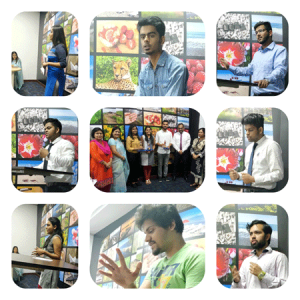 With an intent to provide a platform to whet the public speaking skills of students, Speechathon 2018 was organized at Manav Rachna recently, under the mentorship of Manav Rachna Literary Society.

Some of the most impactful student speakers of Manav Rachna Educational Institutions participated and delivered outstanding speeches in the competition.

The event was graced by Mr. Nitesh from Corporate Relations and Career Management Centre who also heads the Manav Rachna Literary Society. The competition was adjudicated by the panel of 3 judges including Dr. Kiran Gupta, Faculty of Education, MRU; Dr. Shivani Vashisht & Dr. Sujata, FMeH, MRIIRS.

The competition had two sections- Prepared speech & Extempore. Students who qualified the Prepared Speech round reached the second level – Extempore where they spoke impromptu on a common topic.

Expert Lecture on the eve of Dietetics Day