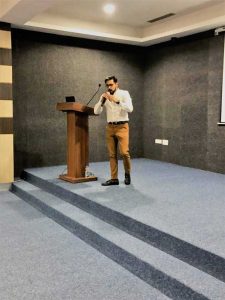 Faculty of Management Studies, MRIIRS organized a session for MBA students by Mr. Saksham Sharma, a digital marketing specialist in Philips India. Mr. Sharma talked about the campaign Phillips India ‘Love It Trim It’ in which they signed Virat Kohli. He informed the students about the challenges in the campaign such as people focussing more on Virat Kohli than the content. Secondly, he talked about the campaign by NIKE ‘Just Do It’ launched in 1986 and again the same campaign launched on its 30th anniversary in 2016. But at that time, people tweeted to boycott Nike. Then a film titled ‘Dream Crazy’ was launched which increased the sales of Nike to 60 percent. He talked on tone of voice and emotional branding of heroism and how it is used to connect with the audience. Lastly, there was a question answer round. He connected with the students and suggested them to  work on extra  projects and opportunities apart from regular studies.

SAFARNAMA: The journey continues-A step towards sharing and distributing happiness

One District One Champion award for the Best practices in Swachhta