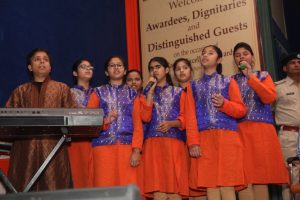 Smt. Satya Bhalla said: “At Manav Rachna, excellence is a continuous journey. Our institutions have been working ceaselessly to actualize the dream of our Founder Visionary Dr. O P Bhalla. It was his dream to give to the nation, well-rounded citizens who are balanced in their approach, yet revolutionary in their ideas.

It is noteworthy that Prof. Governor of Haryana Prof. Kaptan Singh Solanki gave away the honours at the first Manav Rachna Excellence Awards 2018. Reminiscing the first edition, Prof. Kaptan Singh Solanki informed the audience that the awards are a true reflection of nurturing human capital. He stressed upon the importance of the four key elements of Spirituality, Self-Control, Respect and Compassion in the success of individuals.

Visit to World of Concrete, Pragati Maidan by PG Students of Department of Civil Engineering