Manav Rachna University welcomed its students with great zeal on second day. A session on Anti-ragging Measures and Discipline at MRU was conducted by Prof. D.K. Sharma, Proctor, MRU. This was followed by the session on ‘Mentoring at MRU: Know Your Program Coordinator’ in which the role of the coordinators was introduced to the students. Dr. Sangeeta Banga, conducted this session and focused on role of a mentor and a mentee. The day also had an energizing Zumba session in which all the students took part with great enthusiasm. 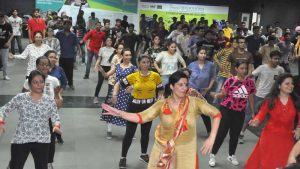 A special interaction with Corporate Relations and Career management Centre was planned for the students to apprise them with the skill enhancement resources and courses available at the campus. Mr. Gautam Srivastava conducted the session wherein he gave a detailed scenario of the corporate reality checks along with a brief note on foreign languages.

A session on Positive Psychology was conducted by Dr. Jitendra Nagpal, a world renowned psychiatrist who is Sr. Consultant Psychiatrist and Head of the Institute of Mental Health and Life Skills Promotion & Institute of Child Development and Adolescent Health at Moolchand Medcity, New Delhi. Sharing many examples of mental health with the students, he asked them to ‘become a crusader for mental health’. He presented a video on ‘drug addiction’ to the students on the basis of which he instilled the various aspects of communicable and non-communicable diseases. Addressing the students, he said, “Emotional Quotient starts with the idea of protecting the Intelligence Quotient”. While interacting with the students, he stated that temperament is the only thing that is affecting the youth physically and mentally.

These sessions motivated students to work for the society and innovate during their college years in order to improve.

Day 3 of ‘The Law Week’ Celebrations at the campus!