“A Nation’s Culture resides in the hearts of its people.”

January 26th is celebrated with great pride and glee all over the country and so was the way it was celebrated in the campus of Manav Rachna. 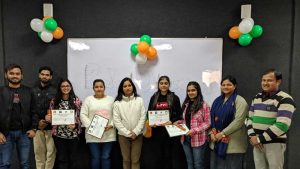 Students and Faculties participated in various cultural activities. The Poem recitation was flooded by diverse philosophical thoughts on life. Theme of overcoming life struggles reflected positivity and possibilities of Building Peace. Students grooved on peppy numbers and the moves made the audience cheer. Singing competition was very melodious and beet boxing, Rap, light bollywood numbers were presented by students.

The Literary vertical organized a Panel Discussion to rejoice the 70th fervor of being Republican. The topic of the Panel Discussion was “Is India truly a Republic.” The competition involved various stages of expression where teams submitted to their points in writing as well as debated on them.

In conclusion of the event the students were awarded certificates on the basis of teams and individual performance. Thus the spirit of Republic Day was celebrated by a series of events organized under the Headship of Dean, Students Welfare and various Departments of Manav Rachna University.