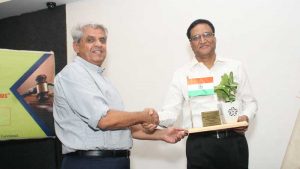 Mr. Modi emphasized upon the need to comply with the tax laws. He opined that India’s tax revenues is somewhere between 16-18% of GDP which is quite unsatisfactory. Talking about the tax evasion, he said that this is one of the primary reasons for the government to adopt stringent measures in the economy today, including demonetization. He discussed about the Benami Property Transaction Act in context of the de-monetization. He was of the opinion that the relentless pursuit against tax evaders will continue irrespective of who is heading the government.

He informed the audience about the relevance of  the provisions under tax laws that provide the defaulters an opportunity to declare income and pay one time tax and file the returns. He emphasized that the increase in compliance of tax laws would eventually lead to lower tax rates and better delivery of public goods.

At the end of the lecture, forum was opened for QA session. He prudently handled all the queries from the audience. Again a reference to large scale non-compliance surfaced to which Mr. Modi said that burden of non-compliers shift to the compliers.

Mr. Rajesh Bhoot clarified the doubts of the audience on  E-assessment, the purpose of which is to eliminate the interface between the Assessing Officer and the assessee. In a brief introduction about e-assessment, Mr. Bhoot said that filings made by the assessees pass through many filters (authorities) which reduces the chances of litigation. Through video-conferencing assessees get the chance to represent their cases. This entire process helps segregate the administrative and quasi-judicial functions of the department, besides increasing transparency and satisfaction.

Dr. Meenakshi S Khurana, Pro-VC, MRU expressed her gratitude to the speaker and participants, and declared the Manav Rachna Public Lecture series open, inviting suggestions from learned audience which consisted mainly of CAs, trade experts, exporters, Public servants and lawyers regarding subsequent Public Lectures. Vote of Thanks was proposed by Prof. Arindam Chatterji who is also coordinator of the lecture.

A Session on “The Thinking of Pt. Deen Dayal Upadhyay Towards Nationalism”