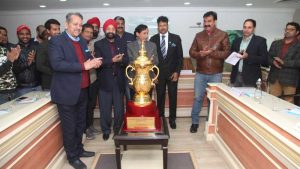 The Champions Trophy of this coveted tournament was unveiled in the presence of the Managers/Captains of the participating teams; Dr. N C Wadhwa, Vice Chancellor, MRIIRS; Dr Sanjay Srivastava, MD, MREI; Mr. Sarkar Talwar, Director-Sports, MREI and other senior dignitaries.

During the unveiling ceremony, apparel was distributed to the teams and the draw of matches was taken out. 55 matches will be played in the 12th Manav Rachna Corporate Cricket Challenge Cup 2019. The teams have been divided into seven groups (with four teams in each group). During the first phase, league matches shall be played. These will be followed by knock-out matches. The top two teams from each group will qualify for the knockout matches.  The final match of the tournament will be played on March 30, 2019.