Press Release: National workshop at MRIU provides a road map for Haryana to conserve its water resources along with recommendations for efficient utilization of water in Smart cities and villages

Manav Rachna International University (MRIU), Faridabad, in association with Indian National Committee of International Association of Hydrogeologists (INC of IAH) and Municipal Corporation Faridabad (MCF) organised a National Workshop on the ‘Role of Groundwater in Smart Cities & Villages’ at the campus here today. The Workshop held to mark the Golden Jubilee year of the formation of Haryana State analyzed ways for achieving sustainable economic development, food and water security in urban India as well as the world. The august occasion was graced by His Excellency Prof. Kaptan Singh Solanki, Honourable Governor of Haryana, as the Chief Guest; Mr K.B. Biswas, Chairman, Central Ground Water Board and Dr Sanjay Bajpai, Advisor DST, New Delhi; were the Guests of Honour. 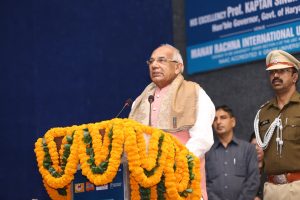 The objective at the National Workshop was to create a platform for interactions amongst different stake holders like Government organizations, Research Institutes, Industries, NGOs, Voluntary Organizations and Individuals to express their views and expectations from Smart Cities and on the role of Ground water in Smart Cities and Villages. Three awards (namely the Smt Savitri Chadha Memorial INC-IAH Awards) in which two awards for outstanding works in Indian Hydrogeology and one for Young scientists working in Indian Hydrogeology were awarded during the workshop. While Prof. Saumitra Mukherjee, JNU, New Delhi won the award for Excellence in Groundwater Science; Professor Shakeel Ahmed, NGRI, Hyderabad won the award in Groundwater Investigation and Management. Dr Sudharshan Sahu, CGWB, Bhubaneshwar, won the Young Scientist Award in Groundwater Studies.

Addressing the gathering, His Excellency Prof. Kaptan Singh Solanki, said, “It is deeply gratifying to witness a National workshop on groundwater management in smart cities where its citizens are expected to be smart and sensitive. I extend my heartiest congratulations to MRIU for creating a forum for a water conscious society in smart cities in keeping with its motto of ‘creating better human beings’.

Speaking on the occasion, Dr D.K. Chadha, President, INC-IAH and Former Chairman Central Groundwater Board, said, “One of the areas of challenge in building Smart city is efficient water management particularly the groundwater component. After the mission of 100 smart cities, the next step of the government is to build 132 smart villages in the year 2016. Cluster of villages would be chosen and developed with science and technology intervention with important criteria of Smart Sewage treatment facilities and Smart rain harvesting/rain water drainage system.”

While discussing the issue of Ground water for achieving sustainable development, and water security in Urban India particularly in upcoming Smart cities in India, Dr Prashant Bhalla, President, MREI, stated, “The Workshop has accomplished its mission of creating a platform where the idea of developing ‘Smart cities’ incorporating various technology and citizen involvement has been amicably discussed. Such constructive measures would improve the water crisis in the rural belt and help conserve the blue gold. This Workshop, held on the Golden Jubilee year of the formation of Haryana State, maybe a drop in the bucket, but it can be the first wave in a tide of change!
At the conclusion of the Workshop, a road map for Haryana to conserve its water resources with recommendations for efficient utilization of water in Smart cities and villages across Haryana was presented. This model can later on be replicated across the country. With this in mind, Centre for Advanced Water Technology & Management at MRIU has committed itself to promote awareness, build commitment and trigger action on critical water issues at all levels, including the highest decision-making level, to facilitate the efficient conservation, protection, development, planning, management and use of water in all its dimensions on an environmentally sustainable basis for the benefit of all life on earth. 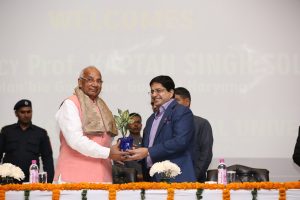 The Workshop also witnessed the declaration of Government Initiatives on Cashless Transactions for Public Awareness which was promoted by Engineering Projects (India) Ltd (EPI) in association with Manav Rachna International University. It was pointed out that the Government initiatives on Digital Payments for Cashless Transactions could be conducted through various modes/Apps such as UPI (Unified Payments Interface), USSD (Unstructured Supplementary Service Data), e-Wallet, Cards, PoS (Point of Sale) and AEPS (Aadhaar Enabled Payment System).
Speaking about the initiative, Dr. S.P.S. Bakshi, Chairman-cum-Managing Director, Engineering Projects (India) Ltd (EPI) said, “EPI is committed to promoting public awareness on the government initiatives for cashless transactions.”
On the subject of this unique initiative and endeavour, Dr Prashant Bhalla, stated, “MRIU is proud to associate with EPI for sensitizing the public on government initiatives on digital transactions in the demonetization era.”
—