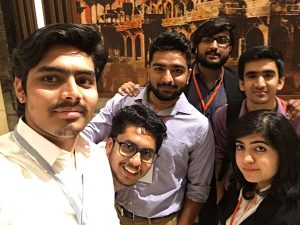 Students of Department of Business Studies, Faculty of Commerce and Business Studies (FCBS), Manav Rachna International Institute of Research and Studies (MRIIRS) reached the final round of National Leadership Olympiad on Saturday March 24, 2018. A total of 461 teams participated in the Leadership Olympiad on the undergraduate level. The team of BBA students from MRIIRS secured their place in Top 10 after clearing various rounds.

Gen-Z Leadership Olympiad was first-of-its-kind Pan India contest to identify the leaders of tomorrow. This multi-step competition challenged contenders on all parameters of a great leader and gave them an opportunity of lifetime to make their case in front of corporate honchos and academians.

Mr. Amit Sharma from BBA (Global) International Business, Ms. Shivali Chawla and Mr. Mayanka Niruala from BBA(General) qualified in Top 20 after clearing telephonic interviews on various current affair and management topics. Later that, they appeared in Public Speaking rounds in which they spoke an extempore on various topics like ‘Make in India’, ‘Banking Sector- Is it good or arduous?’ and ‘Nandan Nilekani Vs Narayan Murthy- Whose performance is better?’

In next level, they underwent various tasks in a team. In the last round, they analyzed a case study and presented it in the form of a presentation.

Mr. Raghu Ram S.K., who accompanied the students, also won a gift by answering few questions during the event.

MBA after Engineering as a career option