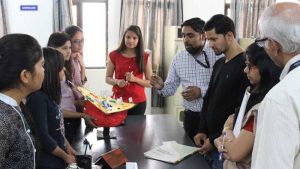 To celebrate National Science Day, Club Biotechnea and Molecular Biosciences Research Cluster organized “Teaching Model Competition” recently. The theme of the event was to design a teaching model in such a way so that the students can understand the basics of science. This was a team event where the number of participants was limited to three members per team. In total, seven teams from B.Tech Biotech participated in the event. The competition was tough to be judged as the judges were in a dilemma whether to assess a model on its teaching ability or its research ability. The team of Drishti and Muskaan from B.Tech Biotech 2ndSemester bagged the first prize. Students of fourth semester; Taruna Dhingra, Tanmaya and Simran Verma were the runners up. Certificates of participation were given to all the participants and volunteers and prizes were distributed to the winners.

MRIU’s Team Kalacar is all set to Race to Victory at the National Karting Racing Championship (NKRC) being held in Kolhapur, Maharashtra!