Manav Rachna Life Skills Programme is a regular feature at the campus which is repsonible for inclulcating various life skills among the students. Various activities were conducted as a part of Manav Rachna Life Skills Programme at Manav Rachna University which included Dance Auditions, Doodle Workshop, Media workshop, Poetry Competition, and Sports activities. Dance Auditions were adjudged by Mr. Subrohjeet and Mr. Yashumeel from Mridaksh along with dance team members. The selected students will be now a part of MRU Dance team and will have an opportunity to participate in various activities. 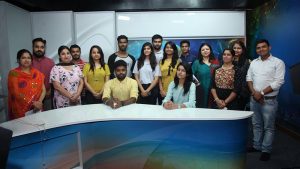 A Doodling workshop was conducted which started with the doodling basics, making rough lines, drawing cartoons, and various patterns. An Expert talk on “Interactive session on Media” was conducted by Ms. Shailja Naqvi (Dy. Director, Radio Manav Rachna 107.8) at Media Center. Students were given information about the Media & entertainment industry and career growth in it. They were taken to the radio station where they were told about the working of the radio station and technical aspects of the same. They were shown certain songs & programs going on. After that they were taken to the TV studio and PC (Program Control) room. They were shown the Live TV studio situations.

This was followed by the Poetry Competition conducted under Literary Vertical of Manav Rachna Life Skill Programme. Students spoke on various topics including patriotism and the way of life. Mr. Ram Chatterjee and Dr. Lavanya Sharma were the judges for the event. Deepanshu, Muskan Ahuja, Parul Matta and Pooja Kashyap were the winners of the Poetry Recitation.