The event was organised in association with Morarji Desai National Institute of Yoga, Ministry of Ayush, Government of India. 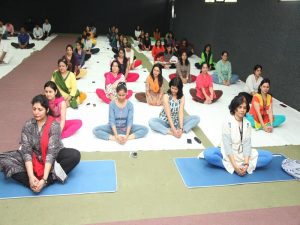 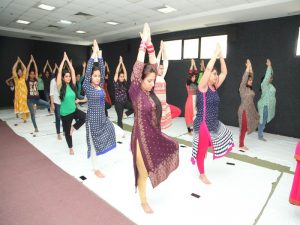 In his welcome address, Dr. N.C Wadhwa, Vice Chancellor, Manav Rachna International University extensively spoke about the need of Yoga in these challenging times. He said, “For the past one week several events are being organized across the globe spreading awareness about the goodness of practicing Yoga.” Elaborating further on the benefits of Yoga, he said Yoga is a way of life which inspires us to live a healthier life. It’s just not an exercise but helps in rejuvenating oneself and it’s a confluence of body, mind and soul.

He also said Prime Minister Narendra Modi’s initiative at United Nations General Assembly for making June 21 an International Yoga Day, is showing the effect as it is being adopted by citizens globally. Being the first civilization of the world, India has contributed a lot to the world and known as Jagat Guru.

After discussing the benefits of inculcating Yoga in everyday life, he led the enthusiastic group of staff and students to practice Yoga.

Morarji Desai National Institute of Yoga is an autonomous body under Ministry of Ayush, Government of India.

The group was also awarded with the Certificate of Participation at the end of the session.

Besides this, Manav Rachna also supported Sangeetmay Dhayan Avam Yog. The camp was organized at Parade Ground, Police Line, Sector 30, Faridabad on June 21, 2017. Around 1500 students as well as faculty members attended the event with excitement and energy.

International Yoga Day is being celebrated in nearly 180 nations. Some of them, including China and UK, have scheduled events through the week. The United Nations headquarters in New York has been lit up with images of yoga postures.

Manav Rachna recognizing and reliving the journey from ordinary to extraordinary