Mr. Kapil Rana (1/12/FET/BCI/1/009), student of 2012-16 batch visited the department on 16th October 2017 between 10 to 12 AM.  He was placed in Kalandi Rail Nirman Ltd., through the campus placement drive conducted at MRIU. He belongs to Hisar district of Haryana and is presently working as Trainee site Engineer in the placed company posted near Lucknow on a project dealing with conversion of meter gauge in to broad gauge. His present CTC is 3.6 Lakh per anum. He is happy with the working environment as he has learnt a lot during execution of the projects assigned to him.

He was warmly welcomed by Dr. Sadiqa Abbas, HOD, Civil who interacted with him over a cup of tea informally for about 10 minutes. During this interaction she inquired about his current placement, his feedback on the working environment, problems faced by him at site during his working and other associated issues. 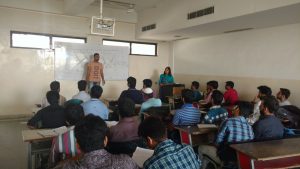 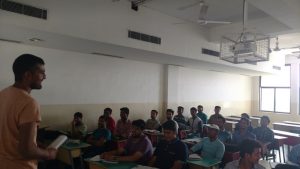 Then she asked Mr. Amit Bhardwaj to arrange for his grade card which was promptly done. He was requested to fill the details in visitor books and fill the Alumni Feedback Form with free and frank opinion, which he obliged.

Thereafter Col R.K.Singh escorted him to class 5CB and introduced him before the students. Thereafter he requested Mr. Kapil to address the students giving his experience during his stay in MRIU and his experience in his present assignment. Firstly he motivated the students to do well and told them that there is no substitute of hard work. He asked them to be regular in the class, pay attention to the teachers and clarify any doubt without any hesitation. He also requested them to come prepared for the class specially tutorials to derive full benefit of vast knowledge available with teachers.

Thereafter he discussed his placement and present working. He made it amply clear to the students that any company coming for the placement is always looking for good students and it is in the interest of the students to perform well in balance of the time available with them. He told them that there is enough learning opportunities available at site only there should be a will to learn. He also made them clear that sincere and hardworking Engineer will be recognized very soon at the site and he has duly been rewarded also.

Later Col. R.K.Singh took him to office of Dr.I.K.Kilam, Dean Students Welfare. Dr. Kilam interacted with him for about 5 Minutes and asked about his present working, some important remembrance during his MRIU stay and anything which he wants improvements in FET. After the interaction a photograph was taken of Mr. Kapil Rana along with Mr. Kilam, Col. R.K.Singh and one colleague of Mr. Kilam.

Thereafter he was brought back to the department where he was first offered again a cup of tea and was assured of any help in future if required from the department. The HOD wished him all the very best in his future endeavors. Finally before leaving he met all the available faculty and staff members, and expressed his gratitude to them.

Webinar: Changing landscape of HR in pre- and post-times & Role of analytics in HR