Students of the BAJMC course took part in a Model Parliament (also known as mock Parliament) exercise, conducted as part of an observance of the Rashtriya Ekta Diwas (and the Clan activities). 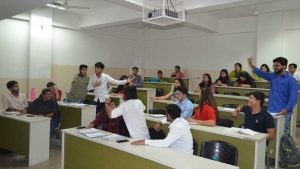 About 40 students took part in the programme. They played the role of Members of Parliament, belonging to different political hues. One of them was designated as the Speaker, who presided over the proceedings. As soon as the House assembled, tributes were paid to the Iron Man of India and the country’s first Deputy Prime Minister Sardar Vallabhbhai Patel, on his birth anniversary by the members.

Later, the House took up the Women’s Reservation Bill for discussion as per its agenda. The students participated enthusiastically in the programme. Most of them came well prepared, doing their research on facts and figures related to the issue. Hence, the quality of debate was commendable.

All faculty members of the department along with Dr. Neemo Dhar, Dean FMeH and Mr. Manoj Raut, HoD were present in the “visitors” and “press” galleries of the House to witness the proceedings.