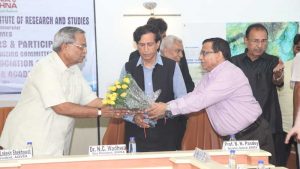 Dr. NC Wadhwa, VC, MRIIRS gave welcome address and said that Private and Deemed-to-be-Universities play a major role in the development of education, and the difference between government and private universities should be eliminated. Dr. Sanjay Srivastava, VC, Manav Rachna University welcomed the guests. Dr. VinodTibrewala said that universities play a major role in producing students as good citizens. He emphasized that universities and industrialists should work in collaboration to produce great citizens. Dr. Lokesh Shekhawat raised the concern that double standards adopted by the government towards Private and Govt. Universities should not be there.

Dr. Sushma Yadav, VC, B.P.S. MV said that there should be a special and different regulation for the universities which do not receive any grant from the Govt. She added that both industrialists and social workers have a role to play in education development. Prof S S Sarangdevot, Janardan Rai Nagar Rajasthan Vidyapeeth University who is also the Chief Editor of AIAVCA magazine, said that universities should be given autonomy, and the education offered should be empowerment, enlightenment and employment based.

‘Academicians should be transparent in their actions’, said Dr. Randeep Singh, Director, Medical Research, Gujarat. Prof. B.N. Pandey highlighted the importance of AIAVCA. Later this, Prof. Kaushal Kumar Sharma, Professsor, JNU highlighted the shortcomings of the DRAFT ACT 2018 by UGC which is about to release. ‘Quality of the education offered at universities is directly proportional to the quality of the faculty’.

Expert Talk on ‘E-commerce and Entrepreneurship’ by Wydr.in Founder & CEO