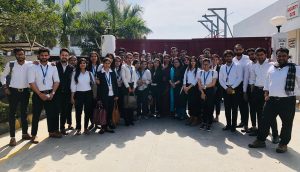 A total of 80 students went on an industrial visit to Moon Coca Cola Beverages Pvt. Ltd., Greater Noida recently. The company is popularly known as ‘Happiness Factory’. The waiting area has nostalgia moments with old advertisements of Coca-Cola adorning the lounge walls.

Mr. Saurabh Singh, Marketing Manager gave a brief introduction of Happiness Factory Coco Cola. The Happiness Factory is a concept developed by Coca-Cola wherein the invitees are taken on a tour of fun filled Coca-Cola themed museum along with production lines. The students were informed that the factory produces 600 cold drink cans, 240 Maaza and Minute-Maid bottles per minute. Students were shown the operational process of Coca- Cola product range (Limca, Mazaa, Kinley Water, Minute Maid, Coca-Cola Zero, Fanta) in bottles and cans of various sizes. It is a global fact that Coca-Cola is the second most spoken word after “Okay”. The “Limca Book of Records” is its in-house publication. The visit showcased the growth of Coca-Cola and its product range since 1886, the year of its inception.

The other part of the visit highlighted various CSR activities undertaken by Coca-Cola. In addition, students participated in an e-based quiz designed to recall the information gathered by students during the visit. Students were thrilled as they X-box games, listening to Coke Studio music and taking pictures at Selfie Zone.

Inauguration of FDP on Cloud Computing