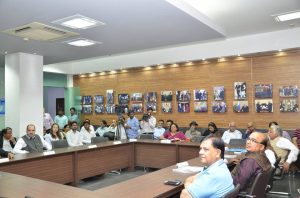 Mr. Umesh Dutta through his presentation threw light on the substantial contribution to mathematical analysis, number theory, infinite series and continued fractions made by Srinivasa Ramanujan. He referred to Sir Jagdish Chandra Bose who pioneered the investigation of radio and microwave optics. One of the fathers of radio science, Sir Jagdish also invented Crescograph, a device for measuring the growth of plants. Mr. Dutta also spoke about the researches done by Sir Har Gobind Khorana, Nobel Laureate. He mentioned the research that showed the order of nucleotides in nucleic acids, which carry the genetic code of the cell and control the cell’s synthesis of proteins.