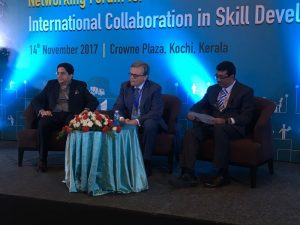 It is noteworthy that Manav Rachna Educational Institutions (MREI) has played a crucial linking role between NSDC, Swedish Industries and other Indian Private Universities. In August, this year, NSDC and Business Sweden (Swedish Trade & Investment Council) had signed an overarching MoU to augment the creation of skilled workforce in line with the requirements of Swedish corporations operating in India/intending to establish manufacturing in India. NSDC and Business Sweden signed a MoU for promoting vocational education & training and setting skill academies of excellence under the above umbrella MoU.

As a next step, at the networking Forum hosted by NSDC today, a MoU was signed between NSDC and Education Promotion Society for India (EPSI) through which EPSI will help NSDC in connecting with Private Sector Universities and Institutions who would be interested to enter into Skill Development. NSDC, Business Sweden and EPSI have evolved an amazing model to take school as well as higher education to the next orbit.

The first set of 25 EPSI Institutions also signed MoU with NSDC and Business Sweden to set up Skill Academies in India to supply skilled manpower as per the requirements of the Swedish companies. EPSI identified these select institutions (from all the four zones of the country) after pre-meetings between NSDC and Institute representatives in Delhi, Kolkata and Chennai. Further, NSDC shall guide these Institutions in setting up World-Class Skill Training Infrastructure for Short Duration Programs.

To make vocational education more effective, Kunskapsskolan Education Sweden (KED) and Manav Rachna International University (MRIU) will jointly implement the unique KED program after necessary adaptation in State Government run schools in India. A pilot project to be run in the State of Haryana was also formalized on this occasion. NSDC will facilitate and manage the implementation of this pilot through Haryana Schools Education Department. MRIU and KED will develop content for six job roles within the sectors of Retail, Beauty & Wellness, and IT/ITeS for students of classes 9th and 11th. The digital curriculum and content will be such which supports the teacher in becoming a personal coach and the student in becoming a self-regulated learner. A detailed agreement outlining the pilot project and its implementation was signed today between NSDC (Mr. Manish Kumar), KED (Mr. Peje Emilsson) and MRIU (represented by Dr. Prashant Bhalla, President). This collaboration shall pave the way for improved student engagement in learning and increased placements in specific job roles.

Session on ‘Decoding Self Esteem’ by Ms. Amarpreet Bakshi, Founder of ‘The Counseling Room’