Manav Rachna Fest Resurrection 2K16 soared to new heights and reached its grand culmination with Bollywood Nite as singer Benny Dayal and  Hindi Band Astitvaentertained the vast throng of young audiences with Bollywood hits. Benny Dayal, who has been a regular at various college festivals and IIFA Awards, has the uncanny ability to feel the pulse of his audiences. And there he was, crooning his favourite numbers like ‘Badtameez Dil’, ‘Bang Bang’ and ‘Locha-E-Ulfat’ to name just a few, which threw the crowd into a frenzy of wild emotions. Beni Dayal‘s high watt energy and enthusiasm knew no bounds! His Gangnam styles moves and deep rhythmic voice made for some amazing music. The crowds just lapped up his songs, dancing to the pulsating beats. 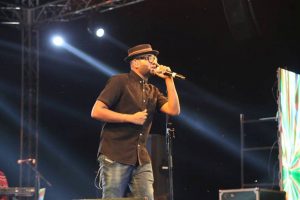 The Nite with its over 15,000-strong crowd also witnessed Hindi band Astitva, a multi genre band, striking an instant rapport with the audience. With Bollywood songs like ‘Yeh Kabira, manja..’, ‘Dil Chahta Hai’, ‘Urvashi, Take it Easy Policy’ in which they brought in a mix of classical, rock, jazz and Urdu influences, Astitva stole hearts at Resurrection. What they also gifted were their trademark t-shirts which further heightened the crowd’s euphoria and joy. The third and final day also had its fair share of creative activities as competitions like theHindi and Western Solo singing finals, origami and quilling, classical solo dance, slam poetry (in association with Delhi Poetry Slam), battle of bands, street soccer not to mention Muqabla-e-filmi and canvas painting gave students the ideal opportunity to explore their creative streak. Resurrection 2K16 did draw to a close (like all good things that come to an end) but it blazed a trail, making memories that students of not just Manav Rachna but also of Delhi-NCR and beyond are going to cherish for very many years to come!

Manav Rachna is organizing a week-long Maha Mrityunjaya Yagna to usher in the New Year!