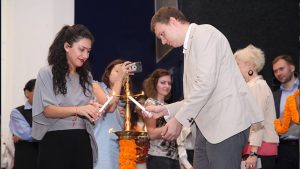 Sh. Anwar Langa and His Troupe was specially invited for the celebrations. They set the tone high for the celebration through their amazing Rajasthani Folk Recital and sang melodious songs such as Engine ki Seeti…, Padharo Maare Desh…, and many more. With their enthralling songs and beats, the team ignited the musical spirit among all creating an aura of excitement and gratitude. The beats of Dholak, Khartal, Harmonium and Sarangi mesmerized everyone. Master Mosin, son of Sh. Anwar Langa captured everyone’s attention when he sang Mere Rashke Kamar…, and a Shayari, in his innocent yet powerful voice.

Dr. N.C. Wadhwa, VC, MRIIRS shared the role of a teacher in a student’s life considering them the nation builders. He said that teachers play a significant role in training human resource. Manav Rachna Music Society also gave an enchanting musical performance leaving everyone spellbound. A memento was also presented to Sh. Anwar Langa and His Troupe.

MRIU Teams dazzle with their projects in Anveshan 2017 at the North Zone–Zonal Level competitions!

Manav Rachna on a winning spree with its SOCIAL INNOVATIONS