The presence of a celebrity cricketer at the Manav Rachna campus is always a cause for much exuberance and joy. So when Legendary Cricketer Sh. Kapil Dev came to inaugurate the final match of the 10th Manav Rachna Corporate Cricket Challenge Cup as Chief Guest, there was euphoria in abundance! The fact that he is the epitome of positivity added to the joie de vivre. As India’s greatest fast bowler who led the Indian team to its finest triumph: the 1983 World Cup title, Kapil Dev’s dexterity with the ball and as all rounder have been the stuff of legends. His presence at the inauguration of the thrilling final between the two time trophy winner Maruti Suzuki India Limited and the defending champion MREI Team gave ample reasons to the Finalists to put their best foot forward. 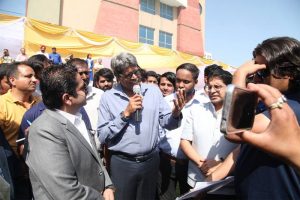 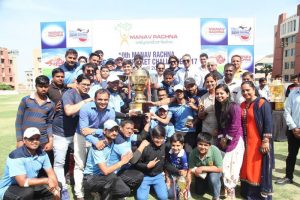 Sh Kapil Dev stated further, “I am amazed at the kind of facilities being provided at the campus. We were never so privileged and played a lot of our cricket on roads and maidans.” Complimenting the Manav Rachna family for its ceaseless passion, he urged everyone to “keep the spirit going and let more people partake of the pleasures of this Tournament which would continue for the next 50 years and beyond”. 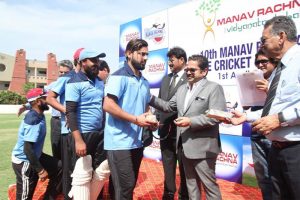 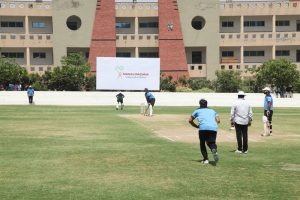 At Manav Rachna, the Corporate Cricket Challenge has over the years become something of a tradition, packing in over two months of excitement with top Corporates wielding the willow at the lush green grounds of the campus. This year too, top corporates like Maruti Suzuki, adidas Originals, NDTV, Australian High Commission, Asian Hospital, JCB, Accenture, TCS, Indian Oil Corporation Ltd., Aaj Tak, HP, Dabur, and the like competed for the top slots, and what followed were scintillating matches and some great cricket.

Manav Rachna Happy Times presents ‘A Conversation with the Olympians’