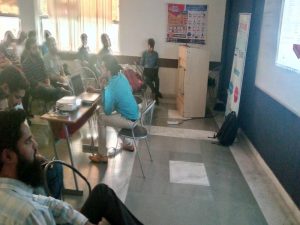 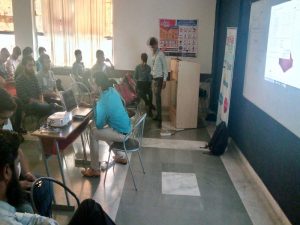 In the beginning, Mr. Shahid gave an introduction of the Chroma Campus in today’s world. He told the students about the various courses available for Mechanical Engineering students like Solid works, AutoCAD, Catia, SAP, etc. He guided the students regarding their future careers in this vast field and as it is exponentially growing at a very high rate in the last 10-15 years.  After his introductory session; Mr. Amit Sharma (Trainer) took the podium and trained the students about the various basic drawing skills and techniques of AutoCAD for the first two hours and this was followed by Solid works. There was also a MCQS Test which was conducted by the team of Chroma Campus in the end and the winners of those were rewarded Prizes and Goodies from the team of Chroma Campus. Both the speakers were extremely helpful throughout the seminar and attended to all the queries and doubts of students.

As per the feedback received from the participants, it was a very good learning experience; the lecture helped them in their understanding of the Concept of AutoCAD and Solid works Designing Technology.

Alumni Lecture on Overview of Patents and Innovation