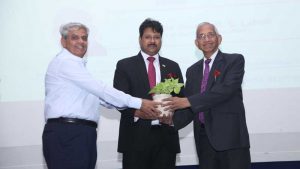 Manav Rachna University (MRU) organized its Fourth Public Lecture on ‘Role of citizens in building Independent India’ today. The speaker for the day was Honorable Justice Ramesh Chandra Lahoti, the 35th Chief Justice of India, serving from 1 June 2004 to 1 November 2005. He served one of the longest terms as Chief Justice in recent years, retiring from office after 17 months. He is also on the Advisory Board of the Indian International Model United Nations.

The lecture started by the speech of Dr Meenakshi Khurana and a sapling was gifted to the Honorable Justice Lahoti by Dr Sanjay Srivastava as a token of appreciation.

Justice Lahoti thanked and expressed his gratitude towards the audience and started his lecture by emphasizing on the several major contributions by Sardar Vallabhbhai Patel towards the struggle for independent India and mentioned his major accomplishments on his birth anniversary.

He also mentioned Smt Indira Gandhi, Former Prime Minister of India on her death anniversary and sang praises of her contribution towards our constitution and independent nation.

She was one of the major driving forces under which the Fundamental Duties were incorporated into the Constitution under Art 51-A by the 42nd Constitution (Amendment) Act, 1976.

Honorable Justice Lahoti, also mentioned that though we are an independent nation but actually how free are we and do we have the freedom all to ourselves or not. He enlightened us about the concept of:

A detailed description on each was given by him by the help of famous examples and quotations.
Justice Lahoti mentioned all the fundamental duties one by one and urged the youth to abide by them. Then and only then we as a nation will develop and grow and will become the nation once our freedom fighters envisioned us to be.

Dr. Versha Vahini, HOD, Dept. of Law, delivered the Vote of Thanks and reiterated our commitment to bring more such relevant topics and acclaimed speakers/experts in future Lectures.

Report of International Webinar on “Design Your Destiny”

Report of International Webinar on “Design Your Destiny”