Faculty of Commerce and Business Studies and Faculty of Management Studies, MRIIRS conducted a Faculty Research Colloquium on April 06, 2018. The session was conducted by Ms Stuti Sahni who spoke on the topic- Promoting Heritage Tourism Scope and Development: Case Study of Delhi. Ms Stuti Sahni has a rich experience of almost 8 years in academia and her core areas include marketing, Law and tourism.

Faculty Research Colloquium has been initiated to encourage peer group learning. It is a kind of research series to encourage faculty members to interact with each other and exchange their views and ideas on improving their teaching skills, methodology and research areas. 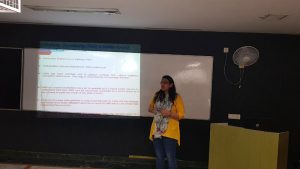 Ms. Stuti Sahni began her lecture with some facts about tourism and continued by saying that tourism in India has significant potential considering the rich and historical heritage. She also gave the fact that India has moved to 65th position in the Tourism and travel competitive index and that 48.3% growth in FTA on e-tourist visa in December 2017 over December 2016.

Delhi has seen many ups and downs and monuments from different periods reflect not only the history but also the varied cultural aspects of different periods which add to the pride of Delhi heritage. Her major research objectives behind the study were to analyze the marketing of world heritage sites of Delhi and to analyze the existing and new practices for promoting tourism. She discussed about major stakeholders in promoting tourism and the initiatives taken by tourism and about the scope in making Delhi a better tourist destination.

Ms Sahni concluded the topic by saying that promoting Delhi tourism showcases the rich heritage of Delhi on one hand and boosts to local economy on the other.

The session was highly interactive as all faculty members shared their opinion about the topic and it gave new research ideas about pricing policy, spiritual tourism and few more.

The Tallest Tiranga was hoisted in Faridabad under the aegis of Faridabad Navchetna Trust to commemorate National Defence Day on 3rd March, 2015