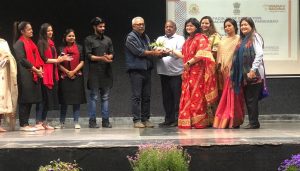 NISD, Ministry of Social Justice and Empowerment, Government of India has granted 2.5 lakh INR to Faculty of Education, MRU for organizing awareness sessions on Drug Abuse Prevention. The first session in the series on the theme Drug Abuse Prevention for the Support Staff of Manav Rachna University was held today.

Invited Speaker of the programme was Mr. Rajiv Shaw -a social activist and philanthropist. He is associated with different NGOs, such as ‘Sahara Aahlad’ and ‘Sharan’ as Chairman and President respectively. More than 140 participants attended the programme.

A very informative street play based on programme theme was beautifully presented by the students of Education Department. This was followed by an interactive session of the speaker, in which the audiences were oriented about different sources of drugs and their respective repercussions. Participants shared their experiences and tried to find out the causes of getting trapped in wrong practices. They were further sensitized by sharing a video on Drug Abuse. This awareness programme saw its success in arising inquisitiveness among target audience and definitely they will look forward for subsequent events in the series.