It has been rightly said “Gender Equality is a human fight not a female fight” with the motive to create Gender sensitivity amongst students, a group discussion and debate was organised in BCA 1st, BCA3rdand MCA 3rd Semester on 21st  September,2017 in T block at Department of Computer Applications, MRIU. The event was organised by Dr. Shaveta Bhatia, Ms. Mridula Batra and Ms. Sonia Duggal. Many students participated in the Group Discussion and Debate competition.First team was led by Sweta Parashar and had three more participants namely Shilpi Pal,Komal Aggarwal and Arushi Singh and second team comprised of Namik Batra, Ravendra Kumar, Vaibhav Vaid and Saurabh Sharma. 20 students participated in Debate Competition. Around 150 students were there to witness the event and cheer up the participants. 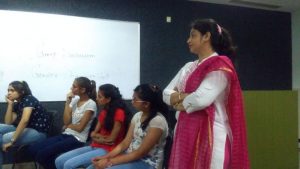 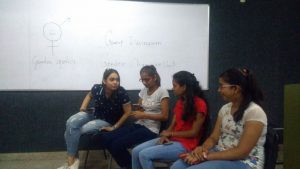 The session involved a brief discussion about all three genders – male, female and transgender. The discussion began with one of the team member throwing light on current scenario in our society.Students discussed about male female equality concept which is believed to exist but is not celebrated in our society to its true spirit. The discussion also involved raising the issue of acceptance of transgenders in our society and the challenges they have to face because of the lack of awareness amongst people.Students came up with various real life examples where gender equality comes out to be a myth in itself.Though we have various schemes introduced by government and various NGOs working in this direction, still situation are actually worse than what we think of.Students also discussed various changes that are the need of our society and how we can take our society towards betterment. The mission was to make every gender have respect for the other gender.