Department of Students’ Welfare, Manav Rachna in collaboration with DEARC Entertainment conducted cultural auditions in 4 genres, i.e. Music, Dance, Lifestyle and Dramatics. This was to encourage the students to come out of their academic shell and explore the cultural side. 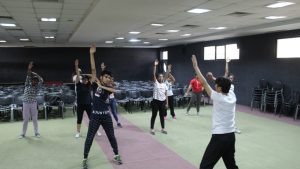 Now that the classes has commenced and started to take a proper structure, we have our first celebrity mentor in Dance, Ms. Sukhmani Lamba. She made her debut in Bollywood as the Sister of Alia Bhatt in the film ‘Badrinath ki Dulhaniya’. In love with being on stage from a very young age, Sukhmani has been an actor and a dancer for over a decade now. She is trained in jazz, contemporary, Bollywood and ballroom dancing. She gained her dancing skills at ‘The Dancework Performing Arts Academy’ and has been dancing since the age of 12, eventually teaching Jazz and being part of the repertory company from 2009 – 2011. Currently, she is learning belly dance under Meher Malik at the Banjara School of belly dance.

Trained in acting under the guidance of Dilip Shankar, she has acted in more than 20 stage plays. Since 2011, she has been working at the Kingdom of Dreams, playing the lead in both of the biggest Bollywood musicals of India – Zangoora and Jhumroo. She is also known for her performances in the plays like Suraj Ka Saatwan Ghoda and Gang of Girls.

The students were elated with her presence and learnt a lot.