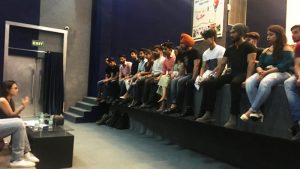 Mr. Jayant Sankla is a professional vocalist who is based out of Mumbai and has received his training in Indian classical music from Rampur Sahaswaan Gharana. He has performed with Kamal Khan, Mustafa Zahid, Shafqat Amanat Ali Khan, Gurdas Maan, Narendar Chanchal and others. He has sung for advertisements for Sprite and has produced and arranged music for FICCI’s ad. He is an Indian music director, playback singer and lyricist, who works in the Hindi film industry and made his debut with the 2017 action-drama movie called Narayan with a beautifully composed song called Shukriya Papa, released by Zee Music Company.

Mr. Jayant Sankla at Manav Rachna interacted with the music group which is getting trained under the supervision of Mr. Vicky. He also taught the basic notes and technicalities about the music.

On the other side, Swati Modo as a brand has been delivering craftsmanship and innovative ideas to the custom made designer shoes. An Ingenious and Charismatic shoe designer with an impeccable eye for detail, Swati Mehrotra crafts each piece to appeal the fashion aficionados.

She started her career working with the A list Designers from WIFW in 2009, Swati runs a shoe making academy in Tihar Jail teaching the inmates the art of shoe making. Brand even earned visibility in Cannes with award winning recycled tyre shoes, Swati Modo won best footwear designer Award from HOP, IFFD and IIFT and has been the Brand ambassador for Ghaziabad city. Swati also teaches students of fashion collages and is on board with Marwah fashion school.

During the class, she introduced the new techniques and improvised the body postures of students. She also taught everyone that the most important thing a model needs to carry is attitude. She also explained the importance of management team during a fashion show. Mr. Prashant and Ms. Nidhi (mentors for fashion) also suggested the students that coordination and togetherness plays an important role in the life. All the students rehearsed and showcased the techniques that they had learnt so far. Everyone enjoyed the session and requested Ms. Swati to visit the campus regularly and guide them. She also offered an opportunity to the students to perform in her next footwear fashion walk.